The completely knitted robe of this New Beetle Cabriolet owned by Marthe and Magnus Schwarz has been elected to be the most beautiful beach Beetle of the year 2013 on the Baltic Coast during a weekend at the largest gathering of fans of all ’round’ Volkswagen models (Beetle, New Beetle and The Beetle) 414 special Beetles rock the Baltic Sea Shores.

The “most beautiful beach Beetle of the Year” was chosen by jurors and it was the one owned by Marthe and Magnus Schwarz. Their convertible in a knitted robe has been chosen among the hundreds of models hailing from six decades, coming from different parts of Europe to the event, was. “It took us seven months and 40 kilograms of wool to create this, it’s been so much fun!” said Marthe. 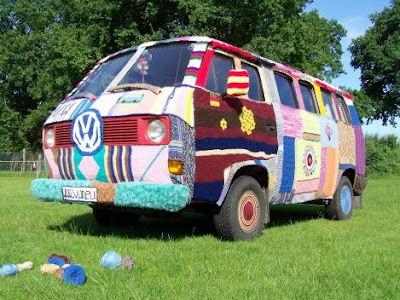 On the 60’s there was a song with the title “Wooly Bully”, maybe that was the key for the idea to wrap a VW Bulli entirely in colorful wool, don’t know, who knows… Employees of Volkswagen Commercial Vehicles plant in Hanover had the idea to dress their T3. Via the Internet, they sought the knitters who turned their ideas into action.

The result can be seen in any case. See, touch – and even bid. Of 13 -15 October 2012, the knitting Bulli was exhibited at the Hanover Messe Infa Creative, was admired and petted by visitors disbelief. Now on eBay for auction, only the sweater, not including the Bulli. The starting bid is set at 5,000 euros.