Price SOLD
Buy Classic Volks – Volkswagen Fastback for Sale Pennsylvania, USA. Moving soon, and must sell my baby, this 1969 VW Fastback that I’ve owned since about 1985. Asking $3200 but is negotiable. Will have more photos tomorrow evening 9-19. Was going to do it tonight but garage door wouldn’t open!

Car has not been used AT ALL since 2005, stored in heated garage. Very little rust, it is a very solid car. Front bumper supports are a little rusty, but not structural rust yet. Small patch on LF fender (see pic), and a little rust under rear fenders near the drain flaps. That’s it! Car was undercoated in the ’70’s which is a good thing around Pittsburgh. Previous owner said the car was in a minor “fender-bender” in the ’70’s,- RF fender was replaced and body work done to Right door. Paint was bad so car was repainted. Body is solid – dent on drivers door and fender, lots of little scratches and chips in paint, and quite a few small dents, but is very presentable. Previous owner removed all body seals around doors and hood, etc, but I replaced a few but not all.

Recently taken out of storage. I drained old gas, drained lines, changed oil, installed new fuel filter, but I have no time or desire at this point to do more to it. It starts, but runs a bit rough (probably jets in carb are dirty from the old fuel, but dual carbs need adjusted, and probably valves too). 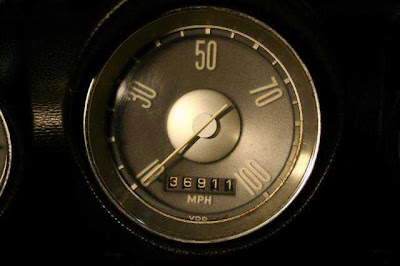 Interior is quite nice, but not perfect. All original upholstery, but door cards have a few tears, as does the drivers seat. Newer carpets.

* New engine (2003) by German Motor Werks in Pittsburgh. Includes dual weber carbs, single QP exhaust. Aprox 1000 miles on engine. I have receipts for most engine work. All original FI components included with car, should you want to take it back to FI. * Brand new battery * Automatic transmission. * Small dents and scratches but very presentable. I used to put it in car shows all the time (won third place once!) * Installed new calipers and cylinders in ’03. LR has a leaking cylinder. * Rare rear stainless gravel guards, gas cap holder (OEM VW) * Newer whitewall tires, including spare. * New shocks * Front bumper is a bit crooked and has surface rust, – rear is much better. * backup lights, day/night mirror, opening rear quarter windows. * Little things need fixed – gas gauge, horn, some dash lights, etc, and things like that, but not much. I used to use it as a daily driver (before the new engine that is). You will most likely need to clean carbs, drain and bleed brakes, etc before it can be driven any distance. * comes with a few vintage ads for the car, owners manual, official letter from VW confirming build date, etc.

It’s not perfect, and not a show car, but gets stares and thumbs up everywhere, and is fun to drive. Location the Fastback in Pittsburgh PA area, Pennsylvania, USA