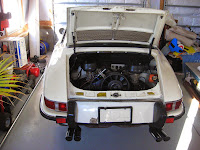 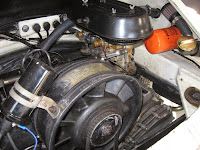 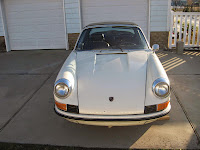 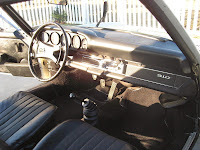 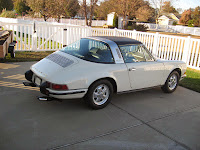 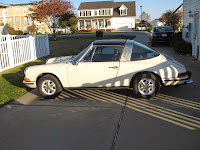 Please ensure you have read the full description. This car is being sold as a NON-RUNNING VEHICLE. This means it cannot be driven without some serious maintenance being performed. At minimum an engine teardown and rebuild or installation of a replacement engine. Also there is STRUCTURAL RUST-THROUGH in the Trunk Pan and outer sills.

The car is currently in located Northeast North Carolina.

I originally purchased this car in Pensacola, Florida, in 2003. The car has been in North Carolina since 2006 and has a clear North Carolina title and current registration.

I recently replaced the original 2.0l engine case #6192065 with 2.0l engine case #6191431 during a recently completed three year rebuild. The original engine had developed problems with the Intermediate Shaft Bearing (around 2006). I obtained a replacement 2.0l engine (from the same year) and completed a build-up of the replacement case, using new parts where needed (main bearings, intermediate shaft, two pistons / rings, gaskets, seals, O-rings, etc). I had previously completed a full rebuild of the original 2.0T engine in 2003. Engine rebuild (2003) included the following (most parts new at the time):

While attempting to start the engine for the first time (2014), I heard a mechanical knocking deep inside the motor. I pulled all of the covers and visually inspected everything (cam timing, rockers, oil circulation) and cannot find an external cause for the knocking. I was able to get the car started, but the knocking sound did not go away. I trailered the car to the local Porsche mechanic and he said that what ever it is, it is not good. I think that there is something in the #3/#6 cylinder area causing the knocking because when I turn the engine by hand, there is binding as #3 piston is coming to TDC. The engine will turn over on the starter with no problems, other than the knocking sound. The only way to figure out what is going on is to tear down and inspect.

The 5-speed transmission (#733830) was rebuilt in 2003 and has less than 5000 miles on it. I recently replaced the input shaft seal and gear selector shaft seal since they were leaking from lack of use. The tranny is filled with new Red Line oil. The tires have less than 5000 miles on them and still look new but are showing dry checking on the sidewalls from lack of use.

Overall the body is in descent shape (10-footer) but the cheap paint re-spray completed by the previous owner more than 10 years ago, is starting to give up in places and is starting to bubble in several places. The interior is in great shape considering its age. May be original. The car has buckets with the waffle-weave pattern, no rips or tears. The dash cover is unmarked and has no cracks. It may have been replaced but I do not know. The lower knee-pad has dry-rot. The front passenger seat does not lean forward but I have a new release cable to fix it. The passenger interior door handle is broken. The speakers were installed prior to my ownership.

The forward lower pan area, in front of fuel tank, has rusted through (see pics). In the lower right side where the front torsion bar bolts to the front pan, there is rust-through of the structural member to the outside of the torsion bar mount (pics). This looks pretty UNSAFE and I would recommend replacing the front pan before too many miles are accumulated. There are some small rust areas on the body but most are barely noticeable. The floor pans were by the previous owner, with the proper replacement parts and are holding up very well. However, I noticed some areas of rust through in the bottom of the right sill towards the back of the car (pics). I do not think this will affect the performance of the car but I want to make sure you are fully informed.

Here is a short list of items that will need attention that I haven’t mentioned already:

I have all of the engine tins. They were removed to get better access the covers.

I have owned this car for 11 years and know it pretty well. The previous owner owned it for about five years. He kept it covered and I have kept it garaged since 2004. Here is a partial list (what I can remember or have receipts for) of what has been replaced, repaired or rebuilt on the car:

I am also including the Porsche 911 Factory Manual (two books), original engine case #6192065, any parts that came off the car, and spares (plugs, gaskets, distributor cap, oil filters, etc.) and a folder full of receipts.

Please ensure you have read the full description. It would also be a great starting platform for a full restoration since all of the bits and pieces are in place. I am only attempting to fully disclose to the best of my knowledge, the condition of this vehicle. There is no warranty implied or expressed; AS IS WHERE IS, NON-RUNNING VEHICLE. I recommend that you have the vehicle inspected (at your expense) or inspect it yourself. Please ask questions if there is something I missed. I have taken over 250 pictures for the car for this sale that can be seen here:

Please do not email me to end the auction early. Bid if you want the car. I believe in the eBay system and will let the auction run its course. Since there is NO RESERVE, the final bid will get the car. Good Luck!

Seller will be able to assist the final inspection and pick-up of the vehicle. I will accept sales to international customers but have no knowledge of international shipping regulations or procedures. I highly suggest that find an agent to assist international shipping. I live approximately 50 miles from one of the largest multi-modal ports in the world, Norfolk, VA. I am sure something can be arranged. I may be willing to trailer the car to you (within ~100 miles) for an additional fee negotiated after the close of the auction and full payment is received.