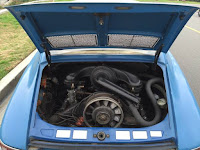 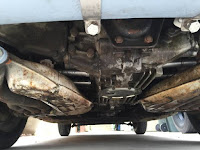 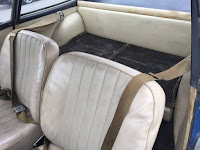 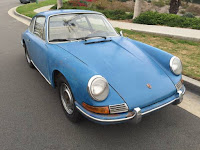 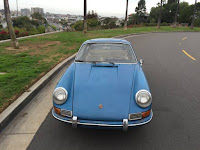 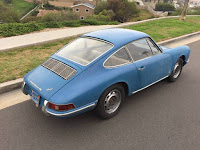 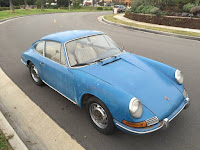 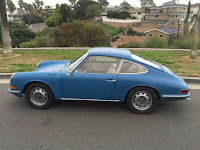 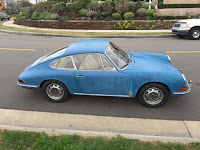 This car is a dirty, grimy survivor. I’ve tried not to clean too much. I almost turned the car over to my detailer, but decided that I like the dirt and weathering. The car is in good running and driving condition, day or night.
Kardex shows it as a Modell 1967 911 deLuxe. I have owned for two years. The car was parked in the 70’s. Sometime in the 90’s the owner decided to convert into a widebody look with fiberglass. The front fenders and front bumper were stored in the backyard. The project was stalled and only the decklid had progress with the grafting of a GT3 wing. The GT3 wing was removed and the original decklid was found underneath, unharmed. The car was 95% complete when I found it. Mostly parts to mount the fenders, J-tubes, clamps, horns, etc. were missing. I’ve spent the last 2 years hunting down used factory parts to complete the car. The suspension pan was the original one and rotted away over 30 years ago. I used a Restoration Design part to replace the front suspension pan. The rockers have rust and had sheet metal covering installed when the car was painted. From the looks of the paint, it appears to have one repaint in the original color, performed over 30 years ago. Only the outer body was repainted. Door jambs and under hoods are original paint. The interior is original with exception to the driver’s seat cover. I recently found an original cover to replace the torn cover. The Hickok seat belts have 1965 date. The radio turns on, but doesn’t work. Fog lights are missing. The horns don’t work. All lights and turn signals work. The brakes have new seals, master cylinder, hoses, front rotors and pads. The front brakes were grinding and may have contributed to the car being parked in the 70’s. The engine is matching numbers. I rebuilt the carbs. Replaced the points and plugs, replaced the leaking oil return tubes, adjusted the valves, and installed a used stock muffler. Swepco 201 in the transmission. The transmission is a 1968 replacement with similar gearing. 4 new tires on original wheels were mounted. All 5 wheels have 3/66 date codes. I have 4 hubcaps, but like the look without them. The owner’s son took the left front fender to High School body shop class and cut out the rust on the dogleg. The workmanship is ok. The fender was in black primer. I recently painted the left front fender and decked to match the patina on the rest of the car. My paint work was fair at best, but it looks better than the primer. The passenger fender has rust in the dogleg. The rockers, jack points and outer floor pans have rust. The pan is dented in places from jacking. I removed both door panels and lubed all window and locking hardware. The starter was temperamental. I inspected and cleaned all contacts from the ignition switch to the starter to no avail, so I installed a Bosch relay kit at the starter. It starts instantly every time. I purchased lots of new rubber body seals, but opted to not replace the torn and dried out originals. The old seals match the rest of the patina too well. Door and ignition (with steering lock) locks are original. Glove box key is missing. I’m putting together a Photobucket album to share 250 photos.