Price $6900 USD
Buy Classic Volks – found this one rare variant of the classic Porsche’s being offered for sale in Gloucester, Massachusetts, this the 944 S2 Cabriolet released in 1990 in fair condition with 212000 miles on it. The owner claims is one of 5656 Cabriolets ever made and one of 2402 was imported in US. Not perfect example of the Porsche 944 S2 Cabriolet but it’s has a lot potential to restored. 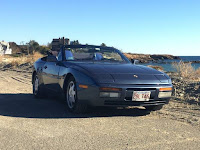 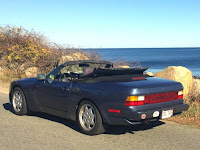 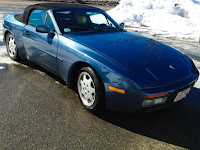 I just had a baby and it doesn’t make sense for us to keep this car right now. It has been a daily driver, but not for years. We are the second owner. As with any car this age, it has some stupid little issues that we keep ignoring. I’m being very honest with the state of this car, not out to take anyone for a ride. I know almost nothing about cars, you really should to own a car like this. I’m at the mercy of the mechanic, so I recommend you know about cars or know a good mechanic who will work on a Porsche. This car is a head turner! It gets a LOT of attention everywhere you go.

PROBLEMS
Emergency brake does not really hold, quoted less than $500 to fix it but we never did it. Never really needed to.
No power steering but it really doesn’t make much of a difference on that car.
Odometer and tripmeter recently stopped working. About 212,000 on it. We’ve owned it over 10 years and it had 180,000 on it when we bought it. The high mileage hasn’t made much of a difference honestly.
Engine leaks small amounts of oil from some gaskets, just keep an eye on the oil light. We have had most of them replaced.
Air bag light recently came on.
Exhaust is a loud. It’s been welded twice between the muffler and catalytic converter. May have to replace parts.
Wipers don’t work on intermittent setting.
Convertible power top isn’t working right now with the button, we just pop it up and down. Relay and switch is new, just needs to be retimed if you want to use the button.
Has trouble starting in the rain sometimes. Someone removed the cowl cover. $105 to replace it.
Drivers side door lock spring went on the outside. I will probably fix this before selling it.