Price $63,000 USD
Buy Classic Volks – a beautiful classic Porsche being offered for sale in Phoenix, Arizona for $63,000, as shown here is 1964 Porsche 356 C white outlaw coupe powered by a 912 Engine with 76000 miles on it. The seller says is a true no rust survivor with a decent repaint over 20 years ago with the interior was renovated a years ago all still remarkably well-preserved today. Is said to be an example was always been stored in the garage since new in the southwest.

Owner says
Selling my beautiful Porsche 356 C Outlaw Coupe. I am a Porsche enthusiast and time has come to let this car go. I have a big 911 project taking precedence. This is a true no rust survivor with a decent repaint over 20 years ago. Previous owner owned the car for over 40 years. Since I’ve owned it, I spent a lot of money refreshing the engine, brakes, fuel system, new weber carbs, gaskets and trim to make this a beautiful driver. It wouldn’t take a lot more then a easy repaint and and some interior upgrades to make this a show stopper. Front seats are restored along with the carpet. The headliner and door panels were done by the previous owner years ago and can be used as is. It now has the highly sought after Porsche 912 engine that has been refreshed and improves power from the stock 75hp to 95hp+. Every seal was replaced recently along with all new lines, belts, plugs, wires, power coating, gold cadmium plating and misc. hardware. No expenses was spared and the engine looks like show quality. The biggest benefit of this car was it was always garaged since new in the southwest so there is no rust.

356 C is the preferred driver’s model as it has 4 wheels disc brakes (which was freshened up at the same time with new lines, fluids and rebuild) compared to earlier 356s. I invested a lot in the repairs and upgrades in the last year alone but the values are still increasing so I felt it was worth the expenditure. I was also able to purchase NOS KPZ 15″x5.5″ oem steel wheels for the proper outlaw look in satin black. Car will come with both sets of stock 15″x4.5″ original chrome wheels and 15″x5.5″ outlaw wheels at full asking price. Please do your research as I have priced this more then fair so don’t insult me with your low ball offers. 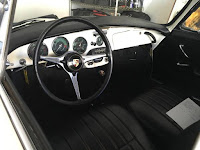 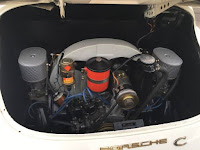 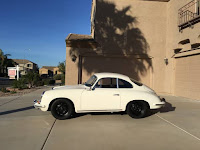